For a good cause

One of my new lovely Sao Paulo friends, who is a native Kiwi too, has roped me into helping her out with the CIWS annual fundraiser. If you are around in a couple of weekends and want to eat, drink and be merry all for a good cause buy a ticket!
All the profits go to Casa São José, a community center that helps 3000 families in Jardim São Luis.
If you are unable to attend but would still like to support in other ways you can contact us on
sponsorship@ciwsbrazil.org or raffle@ciwsbrazil.org.
The CIWS is very happy to announce the 2010 beneficial event
“Luzes do Mundo” to be held on Saturday, October 23rd at the
Residence of the Canadian Consul General, Ms. Abina Dann.
All members of the São Paulo international community are invited
to attend this evening of cocktails, dinner and live music.
Don’t miss out on this great networking and community event!
For those interested in obtaining a ticket (R$150)
please contact Sandra at reservations@ciwsbrasil.org
Looking forward to seeing you there!
Canadian International Women's Society
www.ciwsbrazil.org 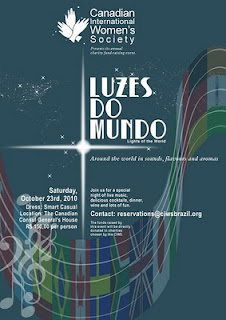 In Buenos Aires trying to sort out our visas... not the worst place to be I guess but I am dying to get back to Sao Paulo to finally start settling in. We have been travelling since 29th December 2009 and our 3 month trip / living out of our suitcases has extended to Month No. 9!

Our visa story so far...
March - process started
April - process for UK police reports takes up to 2 months (no online application so dependent on Brazil post which is actually not so bad...)
May - police reports need to be legalised at Brazilian consulate in London
June - agent submits application but won't be ready for our June London trip so we elect Buenos Aires
July - question about application comes back, agent re-submits with clarifications. Wedding cert and Sophie's birth certificate needs to be translated into Portuguese by an authorised translator. Agent also just remembers that these documents need to be legalised by the consulate (nice of her to remember after going already in June!)
August - one of Tim's colleagues sits next to someone who works in the Ministry of Trabalhadores and explains the situation. He takes her contact details and that week Tim emails the case file.
August 15th - one week later the visa is finally approved BUT we have to pick it up in Buenos Aires, which is a bit of pain as we are heading back to the UK for some weddings.
August 26th - another visit to the Brazilian consulate in London but (obviously) they will not legalise our wedding certificate which is New York issued. Nightmare! Tim finds an agent to send the certificate to in New York but it turns out that it needs to be notarised by the State Department first, and then the City Clerk before the Brazilian consultate in New York will legalise it.
September 2nd - In Buenos Aires by now and the agent calls as he needs Tim to send a notarised letter giving him permission to have our wedding certificate released to him. There is a specific letter format required. The notary system is not as simple as it should be (in New Zealand I had just called up a notary in the yellow pages, went to visit him and it took 2 minutes, literally). A client of Tim's recommended some notaries but we couldn't find one that spoke English so we winged it with one. It turns out that they have to produce a separate formal letter to confirm that they have checked his identification and have it sent off somewhere else and it was going to take 6 hours. When we returned at 5pm they told Tim that it wasn't complete as the formal ID letter also needed to be sent to the School of Notaries to be stamped..... we decided to Fedex it up to NY as it was anyhow.
September 3rd - the NY agent managed to get the certificate legalised at the consulate and fedexed that night. woohoo! Appointment had to be rescheduled for Wednesday as Tuesday was a public holiday.

TODAY - WOOHOO our passports are with the Consulate now. Our appointment was for 12:30 and we turned up but it was really just to submit our forms and passports. She was happy with all our legalised documents, thank god! We were honestly prepared for something else to happen to delay our visa! The fee was much higher than we thought. Our agent in Brazil had told us it was Peso $421 for all of us but it turned out to be $2,400 instead! I think there were additional fees for processing only the British passports but because I hold a NZ passport (and New Zealander's love Brazilians, they have a study/work visa available for Brazilians) there was no additional fee for me.  There was no way that they could fast track it so we pick it up on Monday. Flights have been changed to Monday evening now and we have an extra 5 days here in Buenos Aires so going to make the most of it as don't think we'll be back here for awhile.


*I haven't mentioned the Brazilian agent's name as we haven't completed the process quite yet and I don't want to jinx it! But I will do once we have them in our hands as a warning to anyone not to use her... I guess we got what we paid for, and less : (
Posted by Jaime at 11:34 No comments: