Where to run in São Paulo

I wanted to title this post "Where to run and cycle in São Paulo" but I've never cycled in my life* so I can't really be any expert in that field but on the odd occasion I do run. I even ran from home to Vila Nova the other morning for a coffee with friends; I did get a few strange looks as everyone else was on their way to work. I saw one other guy running with his backpack, must've been another Kiwi! If you've just arrived in the city it's a great way to find your way around. Carry enough money for an agua de coco in the park, and a taxi home if needed.

There are several parks you can run in this city. As usual the weekday early morning is best but if you don't have that option

You can also run down the middle of a busy road where they have set up bike and running lanes. If you don't mind breathing in a few fumes from the 3 lane roads on either side, try Av Sumare and Av Pedroso de Morais (which leads up to Parque Vila Lobos).

USP (Univeristy Sao Paulo) is next to where I live so I get to run in there on the weekends. It is filled with cycling and running groups, as well as rowers (the water is separate to the Tiête..). If you are not a student or professor you can run and cycle in there until 2pm on Saturday and Sundays. It's my favourite place to run on the weekend. If you don't live closeby you can drive into USP, park and run / cycle.

On Sundays, the Ciclofaixa is on! One lane along the main roads in the city are closed down for cyclists and runners. It's very well used as there is little other option to ride in this city outside of Sunday unless you have a death wish. My husband was fond of cycling to work in London but São Paulo is deadly business. The routes for the Ciclofaixa are here. Google "bicicletas alugar sao paulo" for where to rent bicycles. Itau "BikeSampa" also has bicycle stands dotted around the city where you can rent and return.  For the cyclists in you, if you don't mind fumes and smelly water then check out the newly formed bike lane CicloVia along the Tiête too.

If you are looking for races in São Paulo, here are some of the more popular ones

Bertioga-Maresias: 75km along the Litoral Norte can be run individually or up to team of 8 members. We did it last year and it was great fun! There are 2 stages: 31 May and 18 October 2014
Pão de Açucar Marthon 2014: The São Paulo edition is on the 21st September 2014. Applications are still not open.
Pão de Açucar for kids 2014 on 17th May. We took Sophie when she was 2 years old and she loved the whole experience. The actual race was a intimidating as she was one of the youngest in the race but one parent gets to run alongside them. Applications are not open yet.

Here are more races in Sao Paulo this year too if you are really keen.


*I'm guessing 3 times doesn't count: on a tricycle when I was 4, a Sonoma wine cycle tour when I was 33, and on a spinning bike in December at the new and amazing Velocity spinning studio in Itaim.
Posted by Jaime at 09:55 7 comments:

Just a reminder that the clocks are going back one hour this Saturday!!

Don't get caught out! I had a friend who missed her holiday last year because she didn't have the vaccine. There are over 120 countries that require an international certificate of vaccination for Yellow Fever if you are travelling FROM Brazil. You may be used to travelling to the same country from, say the US or UK but it's not the same if you are travelling from here.

You must have the vaccine 10 days from your date of travel. Here are list of Postos de Saude where you can get your free vaccination. Bring along your RNE, RG or passport and if your children are getting them, their vaccination cards.

If you have a yellow vaccination card that is Brazilian and not an International Card (make sure you ask for one when you get your vaccine) you will have to take it to the ANVISA office in the airport to get them to stamp the card before they issue your boarding pass.

Here is my original post on the yellow fever vaccine

*The Closet Sale Continues!! If you missed out on the Sale yesterday there will be an extra day of selling tomorrow, Tuesday 11th Feb from 10am - 2pm. Please send an email to rsvp@spnightmarket.com to confirm your presence, and receive the address.


As a gringa, I do very little shopping here in Sao Paulo. There are some great things but the prices can be absurd, especially imported things that you know cost only a fraction of the price back home. My favourite shop is Oslken, being a local brand and innovative in their design but their shop is actually cheaper in New York than here in São Paulo!

This Sunday is the first ever SPNM Closet Sale, where handpicked sellers have cleared out their wardrobes to sell anonymously. The sale is semi-private, the address will be sent once you have rsvp'd (rsvp@spnightmarket.com). There are lots of fabulous items, alot that are brand new or only worn once, for sale ranging from R10 (our charity box) to R400!

Our nominated charity is Madre Teodoro Casa dos Idosos, in partnership with the Canadian International Society. 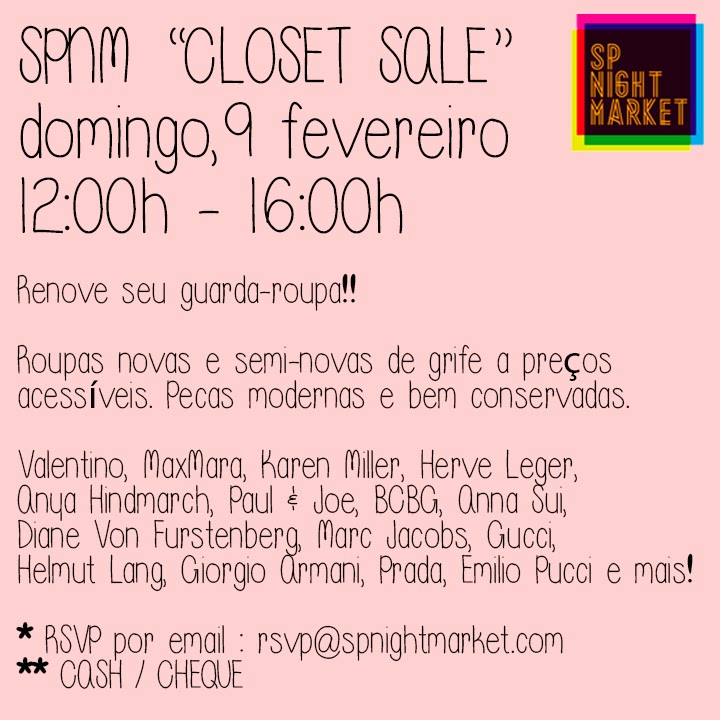 The names of Brazilian states directly translated into English!